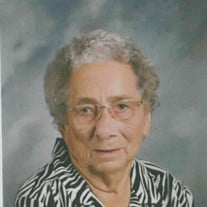 Mrs. Elma Branch O&#8217;Berry was born on September 14, 1921 and passed away on September 2, 2021. She was preceded in death by her husband, Walter Pierce O&#8217;Berry; her parents, Henry and Chinecy Rester Branch and ten brothers and sisters. She... View Obituary & Service Information

The family of Mrs. Elma Branch O'Berry created this Life Tributes page to make it easy to share your memories.

Send flowers to the O'Berry family.