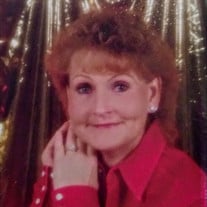 Mrs. Dorothy Faye Hill passed away Tuesday, May 7, 2019, at her home in Bogalusa, LA. She was born in Tylertown, MS., and lived in Bogalusa, LA. Mrs. Dorothy was a faithful member of Mt. Zion United Pentecostal Church in Franklinton, LA. She... View Obituary & Service Information

The family of Mrs Dorothy Faye Hill created this Life Tributes page to make it easy to share your memories.

Send flowers to the Hill family.