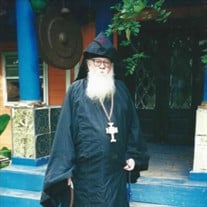 Hieroschemamonk Elia Armistead Yenovkian formerly of the Burning Bush Monastery in MS fell asleep on Wednesday May 12, 2021 in Covington, LA. He was born in Meridian, MS and raised in Shreveport and Monroe, LA. He attended Maryhill Seminary in Pineville, LA, St. Joseph Abbey & Seminary College in St. Benedict, LA and was a member of St. Benedict's Monastery in St. Benedict, LA. He would later enter the Orthodox Church and become a priest and a monk. Fr. Elia spent extensive time in the Holy Land. He was a professor at the seminaries in Jerusalem as well as a lecturer in the United States. During his time in the Holy Land he lived at the Monastery of St. Sabbas (Mar Saba) and at the Monastery of St. Catherine on Mt. Sinai. While in the Holy Land he was a disciple of St. Philoumenos of Jacob’s Well. He wrote one of the most well known pieces about St. Philoumenos his spiritual guide. Fr. Elia knew very well some of the prominent members of the Russian Orthodox Church Abroad such as Metropolitan Philaret and Bishop Gregory (Grabbe). He was also a friend of Fr. Seraphim (Rose). Having left the Holy Land Fr. Elia founded the hermitage Burning Bush Monastery in Ellisville, MS with the blessing of the Archbishop of Sinai. The hermitage was originally a dependency of the monastery on Mt. Sinai. Fr. Elia was known for the making of fine-quality incense. He lived at his Burning Bush Monastery for around three decades. Fr. Elia was known for his work in the translation of church literature from the Syriac language as well as other languages. In his Church services he would use Syriac, Arabic, Armenian and Greek on special occasions. Amongst his arts he was a composer of ecclesiastical hymns and he was an iconographer. Fr. Elia was also involved in missionary work in places such as Alaska and Indonesia. He wrote many Church articles and missionary pamphlets. In addition to his work making incense at Burning Bush Monastery Fr. Elia also worked for the Leader-Call Newspaper in Laurel, MS. Fr. Elia was an animal lover. He had several cats as his companions over the years as well as other animals. He loved cats and dogs and had a particular affinity for ‘possums. The son of Dr. William Wilchia Armistead, Jr. of Shreveport and Monroe, LA and Ruth Young Armistead of Shreveport, LA. He leaves behind his sister Scarlette Armistead Hobbs and her husband James D. Hobbs, Jr. of Providence Forge, VA, niece, Scarlette (Sunny) Hobbs of Providence Forge, VA & nephew, James (Beau) D. Hobbs, III of Austin, TX, an Aunt Martha Armistead McHale of Lake Charles, LA and many cousins and family and friends. He will be laid to rest at the Hillview Memorial Gardens Cemetery in Bogalusa, LA on Thursday May 13, 2021. May his memory be eternal!

Hieroschemamonk Elia Armistead Yenovkian formerly of the Burning Bush Monastery in MS fell asleep on Wednesday May 12, 2021 in Covington, LA. He was born in Meridian, MS and raised in Shreveport and Monroe, LA. He attended Maryhill Seminary... View Obituary & Service Information

The family of Fr. Yeghia Yenovkian created this Life Tributes page to make it easy to share your memories.

Send flowers to the Yenovkian family.