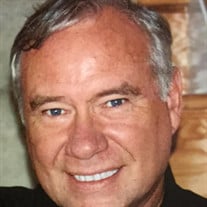 Rodger Earl Talley passed away peacefully in his sleep during the morning hours of Saturday, December 19, 2020. His wife of 52 years, Frances, most keenly feels his unexpected loss. He is survived not only by his spouse but by his three children, Amy (Eben) Wells, Bart (NiCole) Talley, and Jay (Maggie) Talley; his older brother, Darryl; and seven grandchildren: Emeila, Ethan, Ellie, and Eric Wells; Parker and Baylen Talley; and Ari Talley . He was preceded in death by his father and mother, James L. and Vondale Talley, as well as his younger brother, Grant. While Rodger settled and raised his family in the town of Ama, Louisiana, his hometown of Bogalusa was always in his heart. Rodger moved south of the lake to work at the Chevron Texaco Pipeline Co. Gas Plant in Paradis. During his 30 years at the plant, he was known to drive his two British sport cars to and from work. He was an active member and occasional officer of the British Motoring Club of New Orleans with a passion for working on his MGB and Austin-Healey Sprite. As a long time member of the First Baptist Church of Luling, one often found Rodger singing in the choir on Sundays, after helping to teach Sunday School with his wife. His weeknights were often spent in fellowship with other church members as a part of the church volleyball team. After retiring, Rodger reconnected with his old friends from school, the Pleasant Hill Boys, and made new ones via social media. He shared many old stories with friends online. Rodger also began writing his own life stories down in his memoirs. However, he found his truest joy in spending time with his wife, children, and especially grandchildren. He relished every chance to see his three granddaughters and four grandsons. Most recently, he enjoyed watching Formula 1 racing with his youngest granddaughter on his lap. Rodger Talley was a valued member of the community and a beloved grandfather, father, and husband. Everyone that knew him feels his loss but knows that he is at peace with the Lord now.

Rodger Earl Talley passed away peacefully in his sleep during the morning hours of Saturday, December 19, 2020. His wife of 52 years, Frances, most keenly feels his unexpected loss. He is survived not only by his spouse but by his three children,... View Obituary & Service Information

The family of Mr. Rodger Talley created this Life Tributes page to make it easy to share your memories.

Rodger Earl Talley passed away peacefully in his sleep during...

Send flowers to the Talley family.