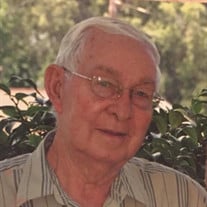 Robert Malcolm Cutrer passed away at the age of 86, on May 16, 2020, at his home in Bogalusa, LA. surrounded by his family. He was born on September 15, 1933. He was a member of Westside Emmanuel Baptist Church. He was a veteran of the Korean War. He had retired as an electrician from the Bogalusa Paper Mill with 43 and ½ years of employment. During his lifetime, he enjoyed fishing and bowling. He was wise beyond his years and always offered the best advice. Robert fought a good, hard fight with his lungs being sick for many years, and he was getting tired. Towards the end of his time on this Earth, he would often say, “The Lord and I have talked many times. When God is ready for me, I am ready.” We wanted his lungs to get better, but God wanted those lungs healed. Special thanks to Dr. Blanco for the care he provided to Robert over the years that allowed him to have so many extra days and years on this earth with us. Special appreciation to Pulse Home Health (Christa and Tony Seal) who had taken such special care of Robert during his sickness. Thanks to Community Care Hospice who was there the last two days to ensure Robert was comfortable. Robert always made sure to tell his health care workers, “You did good. Thank you for what you can do for me.” He is survived by his loving wife, Doris Craddock Cutrer of Bogalusa, LA. June 7th would have been his 58th wedding anniversary to Doris, the love of his life. To cherish special memories of their Daddy, he leaves behind two daughters, Robyn (Kendall) Bullen and Karen (Jonathan) Holston, all of Bogalusa, LA. He is survived by two caring sisters, Verna Lee Smith of Pearl River, LA., and Beatrice Errington of Bogalusa, LA. He leaves behind four grandsons that he loved, Bailey Bullen, Cameron Bullen, John Robert Holston, and Jonah Holston, all of Bogalusa, LA. He also leaves behind numerous nieces and nephews to cherish his memories. He is preceded in death by his mother, Margaine Cutrer Stogner; his father, Leon Cutrer; five sisters, Lille Mae Tullos, Margaret Stewart, Bernice Smith, Faye Polk, and Peggy Sue Varnado; and two brothers, Edward Cutrer and Charles Ray Cutrer. Pallbearers will be Eddie Cutrer, Kendall Bullen, Jonathan Holston, Cameron Bullen, John Robert Holston, and Jonah Holston.

Robert Malcolm Cutrer passed away at the age of 86, on May 16, 2020, at his home in Bogalusa, LA. surrounded by his family. He was born on September 15, 1933. He was a member of Westside Emmanuel Baptist Church. He was a veteran of the Korean... View Obituary & Service Information

The family of Mr. Robert Malcolm Cutrer created this Life Tributes page to make it easy to share your memories.

Send flowers to the Cutrer family.