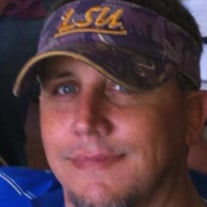 Michael Millard Rogers, age 43, resident of Bogalusa, LA, passed away on August 29, 2020. He was an avid fisherman who loved the outdoors, LSU, and spending time with his family. He was a 1995 graduate of WWMCA and a member of Lighthouse Church... View Obituary & Service Information

The family of Mr. Michael Millard Rogers created this Life Tributes page to make it easy to share your memories.

Send flowers to the Rogers family.