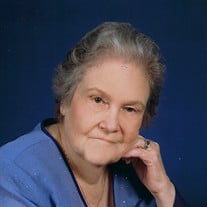 Mrs. Mary Louise LaFleur passed away, Friday, February 7, 2020, at the age of 85, in Lafayette, LA. Mary was a native of New Orleans, LA., and longtime resident of Bogalusa, LA. She gave herself the nickname “Tille”. While in Bogalusa she was president of the “Women’s auxiliary” for the Boy Scouts. She enjoyed her daughters Blue Bird and campfire girls activities. She was an active member of Monroe Street Baptist Church of Bogalusa, LA., and later First Baptist of Ville Platte, LA. She fulfilled her dream of caring for others, graduating as an LPN from Vo-Tech in Opelousas, LA., and then RN from LSU-E. Mary stayed close to her “Multi-wall” coworkers through reunions. She was a big Elvis fan. Mary enjoyed country music concerts, she also supported many Veteran groups, Boys Town and St. Labre Indian school. She collected dolls and plates. She did crossword puzzles in her elder years. She was well known for her great sense of humor. The family would like to extend their gratitude to her Bogalusa, family and church for their love and care. Mary is survived by her daughter Beth Hill Oswalt (Harry) and her children Ashley (Dr. Joey) Salande, Dr. Amy Oswalt, DVM, and Jonathan Oswalt. She is survived by her great grand children Anthony and Micah and triplets Julianna, Sophia and Isabella born, February 11, 2020. She is survived by her late sons daughters, Jennifer Nicole Neitzschman, and Candy Clark (Shawn) and daughter Lilly. Also surviving is her step-son Douglas LaFleur and wife Bonita and their sons James and David and wife Kimberly. She is also survived by one niece Sharon Conerly (Dempsey) and their children Jason and son Drake and Melissa Diane Hammond (Josh) and their children Riley and Andrew. Her nephew in law Kenny Miller and his children Wendi (C.C.) Presson and daughters Danielle and Allie. Wade Miller (Julie) and their six children Eli, Grace, Naomi, Rhett, James and Emma. Amanda Miller and fiancée Nick. Misty Simmons (Matt) and children. And Shawn Wyers and children. Great-great niece Jaycee. Mary is preceded in death by her parents Richard Lewis and Charity Mapes Lewis Hosey. Her husband Dr. Roy LaFleur. One son Bennie Hill, Jr. One sister Wilda Stogner (Olin). Two niece’s Janice Miller and Beverly Stogner Ladner Wyers. And Beverly’s son Kevin Ladner.

Mrs. Mary Louise LaFleur passed away, Friday, February 7, 2020, at the age of 85, in Lafayette, LA. Mary was a native of New Orleans, LA., and longtime resident of Bogalusa, LA. She gave herself the nickname &#8220;Tille&#8221;. While in Bogalusa... View Obituary & Service Information

The family of Mrs. Mary Louise LaFleur created this Life Tributes page to make it easy to share your memories.

Send flowers to the LaFleur family.