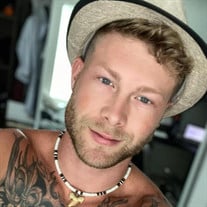 Kevin “Ryan” Freeman, born September 3, 1993, passed away on July 11, 2021 in Scottsdale, AZ. Mr. Freeman was a one-of-a-kind person, who made it a point to make a better future for himself and others. He grew up with life's troubles, in the small town of Bush, Louisiana, but would show himself, his family, and the world that big things could happen to small town people. In 2013, he joined the Marine Corp becoming a helicopter mechanic, to make a difference in today's country and world. However, as he feared, life pushed him down one last time, but Ryan came back up with a vengeance. After experiencing some downfalls of life, losing both parents, homelessness, heavy drinking, prison, etc., he became a beacon for helping his fellow people. He helped rehabbed new released inmates, trained search and rescue dogs, became an ordained minister, and enrolled in San Diego State University studying human psychology. He pushed pass everything that was meant to break him and used it to better his life and others. After achieving all of this, Ryan stated, “and my last name finally fits me. My final box is checked. I fixed my life. I am a Free Man. I am Free. I can move on. I did it.” Ryan leaves behind a girlfriend, Adrianna Secory; one brother, Brennan Freeman and Kaylynn LaCoste; one sister, Morgan Freeman; two aunts: Danie Chavers (Louis Dutel) and Deirdre (Joe) O'Reilly; two uncles, Craig Chavers and Chad (Amanda) Freeman; grandparents, Jane and Billy Gene Jenkins; one nephew, Kade Galloway; four cousins: Lacey (David) Chavers Pechon, Dakota Chavers, Shannon (Sean) Durkin, and Brezlyn Chavers; and a host of other family and a multitude of friends from all over the world. He was preceded in death by his mother, Dolly Jenkins Freeman; his father: Kevin Dewitt Freeman; his grandparents, Shirley Leming and Dewitt Roy Freeman; and one aunt, Tatianna Freeman McClendon.

The family of Mr. Kevin "Ryan" Freeman created this Life Tributes page to make it easy to share your memories.

Send flowers to the Freeman family.