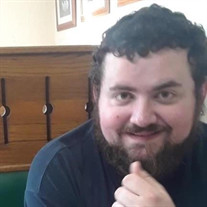 On Tuesday, March 3, 2020, the world lost a beautiful ray of sunshine. Jared David Crain, 25 years young, was unexpectedly called home to be with our eternal Father and Savior. Jared was a loving father, son, brother, uncle, and friend to ALL! he knew. Jared’s life was short-lived and we were not ready to say goodbye. Jared showed kindness to everyone he met and that is evident by the outpouring of love and support by the many people who knew him and were touched by his kindnesses. He never met a stranger, his magnetic personality grabbed you instantly. He is survived by His father Sammy David Crain, of Bogalusa, LA., and his mother Billie Jo Bordelon Campbell and step father Micah Neil Campbell of Jena, LA. Two aunts Tammy Hodge and her husband Curt, of Bogalusa, LA., and Donna Hodge and her husband David, of Bogalusa, LA. Jared has one son Luke Allen Crain by former wife Olivia Crain. And one stepdaughter Henslie Anne. He also leaves behind his loving fiancée Bethanie Anne Trahan. Two sisters. Kristen Dixon Fuselier and her husband Benjamin Fuselier, of Alexandria, LA., and Erica Lynn Creel, of Bogalusa, LA. Jared will be greatly missed by his nieces Samara, Mischa, and Erielle. and his nephews, Harry, Ozzy, Toby and Elijah. He leaves behind, and will be greatly missed by his cousins Sarah Pritchard and her husband Tanner of Crossroads, MS., Summer Allen and her husband Ricky of Bogalusa, LA., Stacy Saraceno of Bogalusa, LA., Tyler Hodge of Bogalusa, LA., and Rusty McMillan and his wife Whittney of Bogalusa, LA. Jared is preceded in death by his paternal grandparents Albert Saib and Lois Erwin Crain. Maternal grandparents Emeric Paul Bordelon and Livonia Marie Ducote. Jared will be deeply missed, his loving spirit will always be with those who knew him. We say goodbye for a short time, until God will reunite us. Oh what a glorious day that will be! Officiating will be Brother Kelly Penton.

On Tuesday, March 3, 2020, the world lost a beautiful ray of sunshine. Jared David Crain, 25 years young, was unexpectedly called home to be with our eternal Father and Savior. Jared was a loving father, son, brother, uncle, and friend to ALL!... View Obituary & Service Information

The family of Mr. Jared David Crain created this Life Tributes page to make it easy to share your memories.

Send flowers to the Crain family.