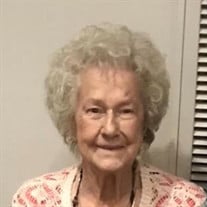 On October 24, 2020, Mrs. Jacqueline &#8220;Jackie&#8221; King Dugas passed away peacefully in her home in Bogalusa, LA. She is survived by her husband Rudy Dugas, the thirty eight years he spent with her were the best years of his life. One... View Obituary & Service Information

The family of Mrs. Jacqueline "Jackie" Dugas created this Life Tributes page to make it easy to share your memories.

Send flowers to the Dugas family.