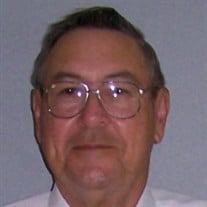 Clabon (Kemo) Baham, a resident of Ponchatoula, La, was called home Monday, October 4, 2021 at his home surrounded by his loving family. Clabon was a veteran who served his country proudly as a Corporal with the U.S. Army and spent 2 of his years in the Korean War. He also owned and retired from Coast Floor Service in Buras, La after 50 years of service. Clabon was one of a kind! There are many great things to say about him but one thing is for sure, he left everyone he knew with big shoes to fill and an amazing legacy. He was never angry or upset, he always seemed to roll with the punches with a smile on his face and would simply say “there’s nothing you can do about it, so why be mad about it.” He was full of jokes and would always leave you laughing or with a smile on your face. “See ya later alligator” is a saying that every grandkid down the line has at least one memory of him saying, and he’d always wait for you to reply with “after while crocodile”. Clabon loved many things: watching his grandkids play, show off their best dance moves, build something with blocks, sing or whatever they were doing, he just smiled with pride as he watched. He loved his “coffee time” while sitting outside with his wife of 66 years, Gloria. He would stop whatever he was doing multiple times a day to sit with her and drink his coffee. It was their time. If you were blessed enough to stop by during coffee time and have a conversation with him, that is a conversation you’d never forget. If you didn’t catch him during coffee time, you’d either catch him working in the yard, sitting in his recliner or building something in his wood shop. Woodworking was one of his favorite hobbies and something he loved to teach his kids and grandkids. Every Christmas, shower and Birthday—whatever the occasion, everyone looked forward to the possibility of getting a hand built gift from him. To say the least, he will definitely be missed by so many, but his legacy will forever be etched in all of our memories. Clabon is survived by his loving wife, Gloria Facundus Baham; three children: Michael (Deborah) Baham, Dewayne (Gaynel) Baham, and Sherrie Baham; nine grandchildren: Julie (Keith) Lacour, Constance Baham and her fiancé James Perez Jr, Michael Baham and his fiancée Vera Freeman, Tabitha (David) Landry, Amanda (Dustin) Daigle, Lindsey Baham, Shelby Baham, and Isabella Baham; nineteen great-grandchildren: Laina, Mark (Alyssa) Landry, Chelsea (Trevor) May, Zachary, Leah, Kalie, Holden, Cameron, Colston, Paisley, Caiden, Chloe, David Jr., Kynlee, Ellie, Daegan, Adley, Asher, Landyn, and Maliyah; and five great-great-grandchildren, Kohen, Anna, Addie, TJ, and Raidyn. He was preceded in death by his parents, Lawrence and Eva Baham; one grandchild, Stacie Baham; one great-grandchild, CJ Buffinet; one great-great-grandchild, Kaydence Buffinet; five brothers, Sam, Ado, Carl, Prentis, Virgil; and one sister, Malvena.

Clabon (Kemo) Baham, a resident of Ponchatoula, La, was called home Monday, October 4, 2021 at his home surrounded by his loving family. Clabon was a veteran who served his country proudly as a Corporal with the U.S. Army and spent 2 of his... View Obituary & Service Information

The family of Mr. Clabon Baham created this Life Tributes page to make it easy to share your memories.

Clabon (Kemo) Baham, a resident of Ponchatoula, La, was called...

Send flowers to the Baham family.