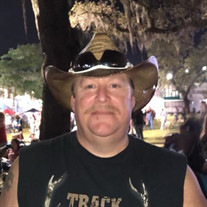 On Wednesday, February 3, 2021, Charles Jason Smith Passed away at the age of 45. Jason was born on September 7, 1975 in Bogalusa, LA., to Charles and Sandra (Varnado) Smith. He was a 1993 graduate of Bogalusa High School. He was an employee of Rayburn Correctional Center for 25 years and was set to retire in just a few months. Jason grew up hunting and fishing with his dad and brother, Bruce. He loved spending time with his family and friends. He was known to shoot pool with his eyes closed and still win. He enjoyed riding his motorcycle with friends, but mostly he loved being a dad and was so proud of his only son, CJ. Jason never met a stranger and will be greatly missed by everyone who knew him. Jason was preceded in death by father, Charles, and his mother, Sandra. He is survived by his son, CJ,; 2 sisters: Kristy (Jared) Kennedy and Duwanna Smith; one brother: Bruce (Cindy) Smith; two nieces: Jade (Jason) Sharp and Erin Kennedy; three nephews: Matthew Kennedy, Charlie Smith, and Justin Fairburn, and great-niece, Lillian Sharp. He was also survived by many aunts, uncles, cousins, and friends. Pallbearers are as follows: Jason Williams, Matthew Penny, Jason Hargrove, William Creel, Jason Smith, Joe Kieffer, Mike Beall, Chad Bergeron, Richard Amacker II, Glynn Maples, and Micah McMurray, all of which are members of the Anawyns MC. Brother LeRoy McElveen will be officiating the funeral services that will be held on, Wednesday, February 10, 2021, at 2:00 PM with visitation starting at 10:00 AM that morning. Services will be held at Brown-McGehee Funeral Home in Bogalusa, LA. Interment will immediately follow at Simmons Cemetery in Warnerton, LA.

On Wednesday, February 3, 2021, Charles Jason Smith Passed away at the age of 45. Jason was born on September 7, 1975 in Bogalusa, LA., to Charles and Sandra (Varnado) Smith. He was a 1993 graduate of Bogalusa High School. He was an employee... View Obituary & Service Information

The family of Mr. Charles "Jason" Smith created this Life Tributes page to make it easy to share your memories.

Send flowers to the Smith family.